Lord Cornwallis Is Dead: The Struggle for Democracy in the United States and India (Harvard University Press, 2009) links the story of South Asian Americans to the many connections—political, economic, cultural, and intellectual—that have bridged India and the United States. By examining struggles against racism, imperialism, casteism, and other barriers to democracy, Lord Cornwallis Is Dead offers insights into the ongoing challenges facing the United States and India—two countries often heralded as “the world’s largest democracies.”

Gandhi’s Search for the Perfect Diet: Eating with the World in Mind (University of Washington Press, 2019) argues that dietary reforms—from vegetarianism to fasting—must be understood in relation to other social, political, and economic struggles. As I say in the book, “Understanding Gandhi’s relationship to food is to understand the man and his life, and to connect two of history’s perennial questions: how to live and what to eat.”

Colored Cosmopolitanism: The Shared Struggle for Freedom in the United States and India (Harvard University Press, 2012) argues that South Asians and African Americans learned from each other in ways that not only advanced their respective struggles for freedom, but also helped define what freedom could and should mean.

Currently, I am at work on two book manuscripts that probe the struggle against racism in the United States in the twentieth century. The first, entitled Brothers: A Family History of Race in America, examines the history of race and migration in Los Angeles since 1965 through the life and death of my older brother, a mixed-race hip-hop artist. My second research project examines the role of truth and education in the civil rights movement.

At the heart of my work is the question of how social movements have flowed across racial, national, and ideological borders. I study the relationship between transnational and global interconnectedness, ethnic and racial diversity, and civic engagement. I have pursued my interests by writing scholarly articles and shorter online essays and blog posts in venues like The Atlantic, Tides, and Berfrois.

The Atlantic piece is an excerpt from my book on Gandhi’s diet. Since you’ve read this far, I’ll share a (Gandhian) treat from the end of that book: Gandhi’s recipe for homemade almond milk.

salt and sugar to taste

Soak the almonds in hot water for approximately one hour. Remove the almond peels and crush the almonds (a food processor or a mortar and pestle both work well). Mix the crushed almonds with 4 ounces of water and boil until the water evaporates. You now have almond jelly. For almond milk, add 2 cups of water and stir briskly over low heat until a milklike consistency is achieved. Add a small amount of salt or sugar to taste (or follow Gandhi, and abstain from both). Hope you enjoy! 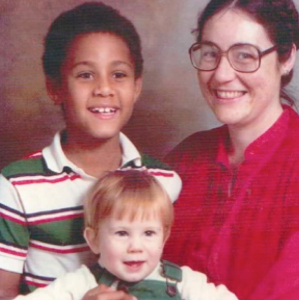